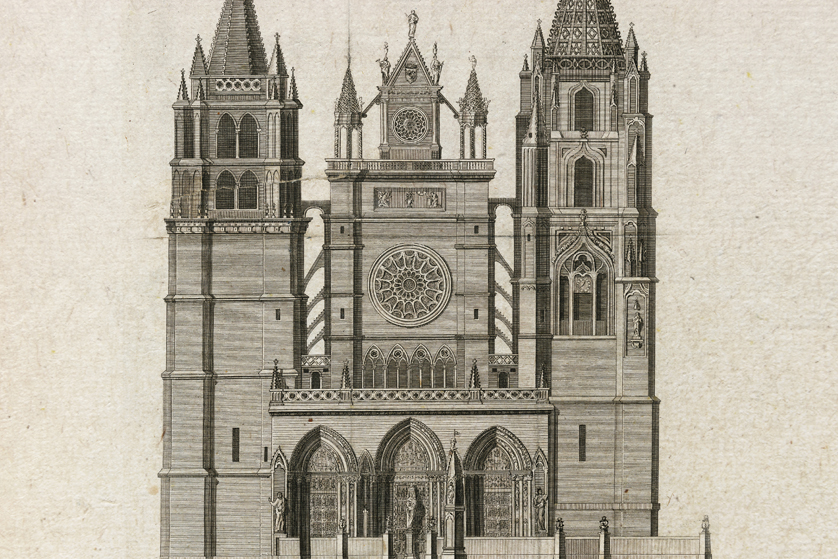 On August 28, 1844, the government of General Narváez —under the reign of Queen Isabella II—, decided to declare León’s Cathedral León as the ﬁrst Na2onal Monument in Spain, in order to receive the ﬁnancing of the so-called «Great Restora2on» of the temple. This statement saved the life of the Pulchra allowing the subsequent genera2ons to know it with its original structure and Gothic adornments. It also leads us today to dream that one day it will become a World Heritage Site, paying tribute not only to León’s Cathedral, but to the protagonists of a decision that guaranteed the con2nuity of other Na2onal Monuments throughout Spain.

The history of León’s Cathedral starts on the site of the 2nd Century Roman baths on which the royal palace of King Ordoño II was built in the 10th Century and which, years later, the monarch yielded to build the ﬁrst episcopal see of León. That area was the base for the construcFon, already in the 13rd Century, of the Gothic cathedral that we know today.

However, the choice of this legendary foundaFon was not the best one to seLle the walls of a Cathedral that used stone from Boñar —white limestone very sensiFve to the weather inclemencies due to its numerous streaks of clay— and had enormous stained glass windows, which further increase the fragility of its structure.

Stonefalls and arrangements must have been frequent during the ﬁrst three centuries of the Pulchra’s life. But in 1631, the architect Juan de Naveda undertook some works in the vaults adding an immense dome over the transept as a Baroque decoraFon. This intervenFon destroyed completely the central part of the building, producing innumerable collapses and leading the Cathedral to a state of ruin in the mid-19th Century.

The emerging Spanish legislaFon on heritage conservaFon was providenFal to save the Pulchra. On August 28, 1844, Queen Isabella II declared León’s of Leon as the ﬁrst NaFonal Monument of Spain by royal order. This meant that the Spanish State took charge of the works of the so-called «Great RestoraFon of the 19th Century». Consequently, the temple was closed to the worship during the 42 years that lasted the works.

The speciﬁc report of the 4th issue of this magazine “Revista Catedral de León” —which can be found in revistacatedraldeleon.es— speaks about all the details of the intervenFon that allowed the Pulchra to reopen its doors on May 27, 1901. That day has passed to the history as one of the most important anniversaries of the city, with three days of popular fesFvals and being the subject of news in the Spanish press of the Fme.

But before that celebraFon, even before the four decades of works and changes, the poliFcians, historians and enlightened architects were the protagonists of the technical, legal and administraFve soluFons to turn the Pulchra into the ﬁrst NaFonal Monument of Spain guaranteeing its beauty to this day.

Now, we want to highlight —through the signatures of three specialists (an architect, a jurist and an historian)—, the importance of this anniversary and to pay tribute to the protagonists of a decision that, over the years, also served to guarantee the conFnuity of other religious temples, civil buildings, painFngs and sculptures throughout Spain.