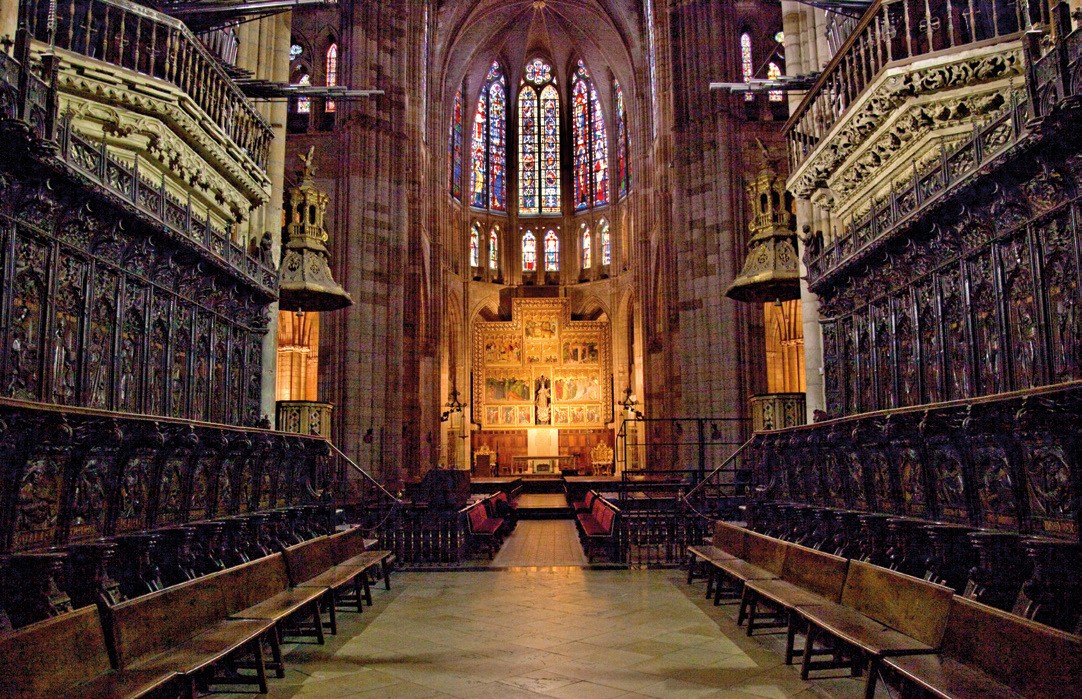 15 Jan Cathedral’s Chapter, faithful to the beauty of León

At the break of dawn, while the day starts and the stained glass windows wash down of dim light the majestic halls of the central nave, a group of wise cross slow but steady the main temple, way to the choir. In it, loyal to their daily commitment in communion with the Church, they will offer their time and life to the sincere prayer for the greater glory of God. Wise men, with hard experience in life and in the learning of science and faith who, even today, are the guardians and custodians of the Pulchra Leonina. [red_spacer spacer_margin=»15″][/red_spacer]
The Chapter of León’s Cathedral has its origin in the 9 Century as it is in this period of history when the own León diocese exists. However, oral and written tradition earlier to this century put th the germ of the Chapter in the religious communities of the Middle Ages, settled during the 4 Century in the city around the temple, with the aim to assist the bishop in his episcopal mission and also to look after the worships that had to be made in the Holy Cathedral Church of St. María.

During this period, León’s Chapter had three orders still being all priests: priests, deacons, and sub-deacons. Each one defined into four ranks: dignitaries, canons, prebendaries and beneficiaries or ministres, highlighting among the dignitaries the Dean, Prior, Precentor, Administrator, Maestrescuela, Abbot of St. Guillermo, Abbot of St. Marcelo in addition to six archdeacons with jurisdiction in the diocese: the one of Valderas, Mayorga, Cea, Saldaña, Benamariel, Triacastela (Lugo) and four functions between the canons: Theologist, Confessors, Master and Legal adviser, canons by public examintation and by grace, pontifical, by presentation and by appointment of the Bishop. These clerics developed their life together according to the so-called vita canonica under the authority of the bishop and by which they should live fulfilling a series of rules which regulated it, with the aim of offering their lives to the worship and service to the Cathedral.