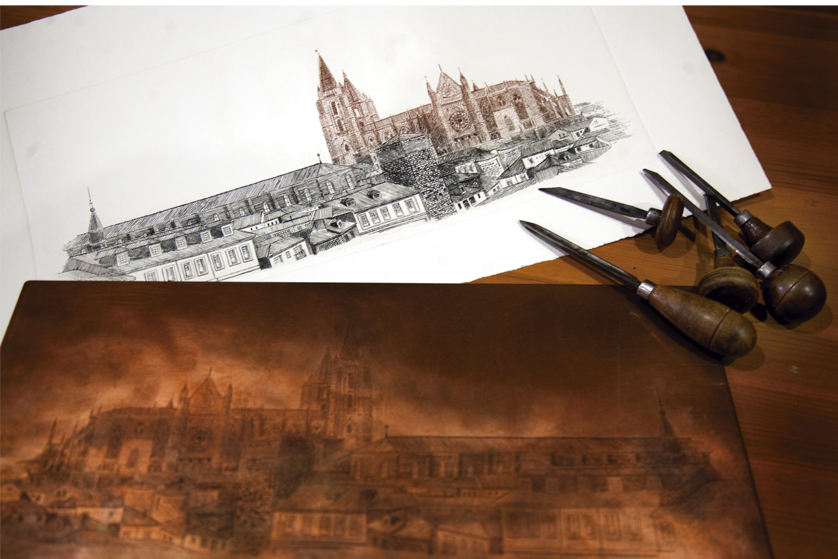 25 Ene Pulchra Leonina, at the stroke of a burin

Thanks to the initiative of Yovanna Blanco, we are able to present a selection of León’s Cathedral engravings —past or present— which demonstrate the mastery of the craftsmen. They were capable of hand-carving the reverse plane of pictures or letters in order to reproduce them in series. The author of the report, a Leonese journalist based in Madrid, has delved into the history of engraving, its techniques and the Cathedral’s Archive until reaching the work of José Holgera, a Leonese engraver who has immortalized the Pulchra Leonina at the stroke of burin keeping alive this millennial technique of illustration right in the 21st Century.

Origins of the engraving

The origin of the engraving goes back to 3,000 years ago, when the Sumerians cut the stones with cylindrical shape in Mesopotamia and carved their designs in them. Then, they rolled them on soft clay leaving the imprint of the original drawing. In the first century —with the invention of paper in China— the engraving began to take shape as we know it today. However, we would still have to wait to receive it in the West. Its arrival occurred in the 6th Century AD in the textile field. The first paper productions in Spain were made in Játiva in 1151. At the beginning of the 15th Century, the xylographies —engravings in relief or with wooden support—  flourished in Germany, being the playing cards the first figures reproduced.

It was in the Renaissance when the engraving excelled. For the first time in history, painters and artists of the moment had the possibility of knowing the works of the classics without leaving their city. With time, the engraving techniques  —that had an imitative character in origin — acquired value and became singular. A few decades after xylography, the engraving from zinc or copper metal plates arrived. The oldest engraving dates back to 1,446 being made in Germany, from where Alberto Durero came from, one of the most emblematic engraving artists of the 16th Century, greatly admired for his 14-xylographs of the Apocalypse edition and his numerous series of religious prints. After Germany, the engraving went to Italy and the Netherlands. Finally, this artistic discipline reached a high popularity being also used in topographical studies and portraits in the mid-16th Century.

In the 17th Century, the engraving was consolidated being Italy the epicenter of its production. Etching was the most widely used technique, once Jacques Callot discovered that by performing several immersions of a sheet in acid, one could get perspective, creating different scenes in an engraving. Spanish and French monarchs commissioned Callot to document various historical events. Additionally, in Holland, Anthony van Dyck —disciple of Rubens— etched with the help of other artists the portraits of the 128 most important men of the moment.

The oldest engravings preserved in León’s Cathedral Archive date from the 16th, 17th and 18th Centuries. These include missals, animal prints or catechetical motifs made, for the most part, engraved on copper plates.

The engravings of León’s Cathedral

As expected, the sumptuousness of the Pulchra Leonina did not go unnoticed to the engraving artists. Different burin prints on copper plate, etching or lithographs from the end of the 18th Century and the 19th Century are still preserved in the National Library of Madrid and in León Cathedral’s Archive.

The same techniques used by the Renaissance masters are those used today by the Leonese José Holguera in his engraving workshop in the center of León. In love with the drawing as a child, he studied Technical Drawing before entering the Industrial Engineering School at the University of León where the plate and the burin came to his life. Initially, he was reluctant to work with these techniques but he decided to try them thanks to the insistence of a teacher. «I knew that it was very complicated. An engraving by Durero is perfect, because each one —the draftsman, the engraver, the printer and the scribe— did his part. Now, the same person does everything. At first, it was terrifying… You can spend half a month working on a plate and you have to throw it away because you have made a mistake with the burin» he confesses.

Time and effort made him change his mind: «I read that Goya sold the paintings but he kept the engravings because he had a hard time making them… Then, I began to understand everything.» One day, he asked his teacher why he was so insistent. «He told me that I had the four requirements to be able to engrave: The drawing, because he had seen me making charcoal drawings since I was 15 years old; I knew how to turn the images around; I knew the importance of shadows allowing me to understand the depths of the lines; And that I had been working in a chemical company for two years and I knew how acids and metals behave».

For a time, Holguera combined his work in a chemical company with the university studies and the engravings until 2005, when he decided to take risks. He left what had been his job for 22 years to focus himself exclusively on his workshop. The beginnings were not exempt from difficulties due to the ups and downs of the economic cycles. «It was very hard to sell drawings in a society where nobody had money, because many people were unemployed». But he highlights two good feelings: That feeling of «doing what I like» and «all the people I have met» and that related to experencies such as climbing to the roof of León’s Cathedral.

The dream of José Holguera

Everything started one night. «I dreamed I was there and I woke up thinking I was falling,» he recalls. The next day, he went to meet Mr. Máximo Gómez Rascón, director of Heritage of León’s Diocese, a good connoisseur of his work and defender of the engraving as the last pure art that still remains. Holguera was not a debutant: he had already drawn the Pulchra Leonina from the outside and also the base of the Virgen del Camino chapel.

From that meeting arose the possibility of joining two icons in the same work, León’s Cathedral and the Way of St. James. With the help of Máximo Cayón Diéguez, official chronicler of León, and of the aforementioned Gómez Rascón, Holguera obtained permission to climb to the Pulchra Leonina. He did it in 2015. «When I went down, I told them that it was impossible. The dimensions are so big and the distance is so short that it could not be drawn. I was not able to take the scale to do it”, he admits. «Only the rose window, which seems small compared to the rest, has 9 meters. Moreover, everything is crooked. León’s Cathedral is made to see it from below, but when you are up there, you realize that the columns are crooked. They have made the calculation so that the cover does not open”, he adds. Special mention are the water pipes. For Holguera, «the stained glass windows are the light, but the greatest advance of the Gothic period was the discovery of how to release the water from the roof. In Roman times, the water drilled the buildings and they fell. Fortunately, they did an hydraulic study in the Gothic period. The channels measure 1 meter and the water goes down at full speed through the slopes that they were added».

The insistence of Gómez Rascón made him to overcome the discouragement and to start with the task. The first engraving he made was a gable, the one that faces the South, the Bishopric. Upon seeing it, the director of Heritage of León’s Diocese exclaimed: «Wonderful, how many more will you do? You told me in your dream that it was the complete tour through the railing». Holguera replied: «I get 14.»

The second one was the apse —from one gable to another— with the gargoyles. He climbed to the roof for a whole year ending a series that left him contradictory feelings. «I’m happy for the aesthetics of the prints, but I’m upset because everything is cramped to fit» he says. Very demanding with himself, Holguera drew a tour from the Latin cross floor which defines the Pulchra Leonina. He made 10 enravings, to which it was added the rose window, two curved engravings and one elevated. All of them were part of La Pulchra en el Camino de Santiago exhibition, showed at Palat del Rey church in 2016 and complemented with texts by the poet, writer and official chronicler of León, Mr. Máximo Cayón Diéguez.