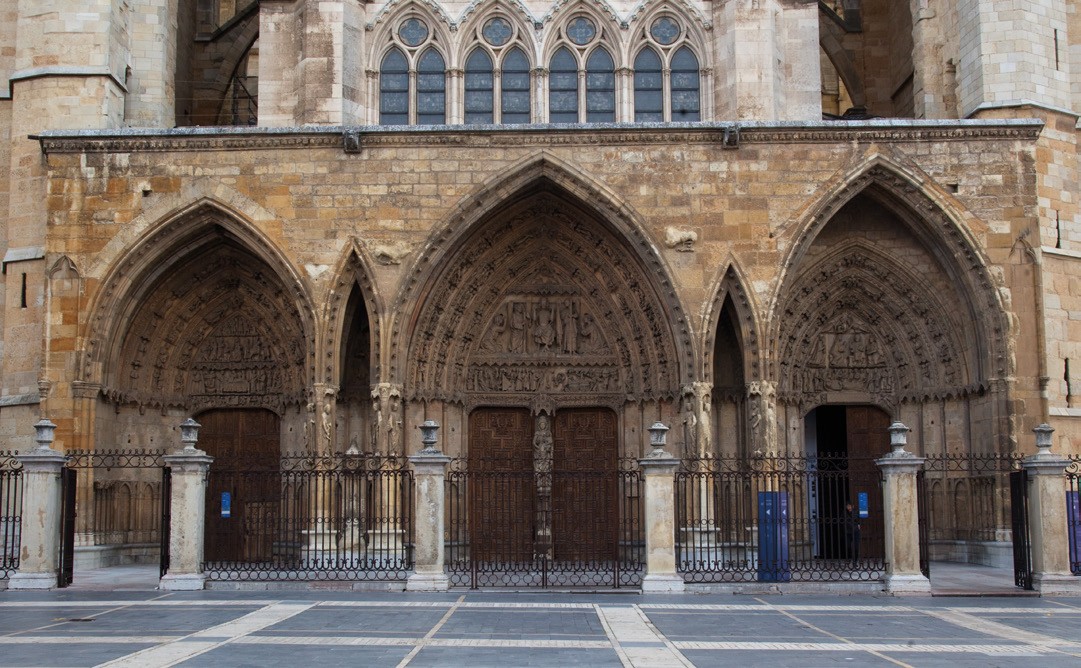 15 Jan Pulchra Leonina, The Gothic Cathedral in body and soul

León’s Cathedral perfectly reflects the spirit of this Spanish region characterized by the nobility of its people and the respect for their ancestors. It is, undoubtedly, the Spanish Cathedral which preserves in a more pureness way the Gothic body and soul with which it was created. In 2003, it was celebrated the 7 anniversary of its worship dedication and, despite the vicissitudes of history, the fragility of its stone and the day’s inclemency, the Pulchra look at the new 21 th Century with the same distinction as it was born over 700 years ago.
[red_spacer spacer_margin=»15″][/red_spacer]
León’s Cathedral stands on a 90,80 meters floor and 26 meters wide, with the typical Latin cross of Gothic cathedrals re- peating the so-called tripartite drawing in floor and height. 3 naves in the largest arm, 3 in the transept and, in this case, 5 in the apse, in addition to 3 levels of vertical succession in the main nave (first level: side arches ; second level: triforium or hallway on the naves and; last floor or clerestory). [red_spacer spacer_margin=»15″][/red_spacer]
In comparison with other cathedrals of the time, the one of León is not too large (occupying a total area of 2,640 m ). And in its original interior —as typical of Gothic architecture—, there was little ornament or sculpture. Only the choir and the retrochoir, built in the 15 2 Century and placed in the 18 th th Century in the center of the apse, break the original bareness of the central nave (75 meters long and 10,50 meters wide), which rises above 30 meters over walls where the stone fuse together with the stunning stained glass windows. This is, undoubtedly, the main feature of León’s Cathedral which shone with magical colors depending on the time of day and the intensity of the sun, making each visit into an unrepeatable moment.

The 1,800 square meters consisting of up to 723 polychrome stained glass windows with thousands of scenes make León’s Cathedral into the largest Gothic sample in Spain and one of the three largest in the world (next to the stained glass windows of the French cathedrals of Mertz and Chartres). The oldest ones, from the 12 th and 13 Centuries, are the stained glass windows of St. Ildefonso (Chapel of El Nacimiento), the ones of El Rosario (Chapel of La Esperanza) the ones of St. Antonio’s Chapel, or the famous stained glass windows of “La Cacería” (the Hunt) on both sides of the nave’s arm. Of all quotes about this unique feature, about the soul of León’s Cathedral, we choose one from which there is no documentary evidence. Some attribute it to an anonymous author and others to the selfsame St. John XXIII when he was Cardinal and Patriarch of Venice and visited León in July 1954: “This Cathedral has more glass than stone, more light than glass and more faith than light”.