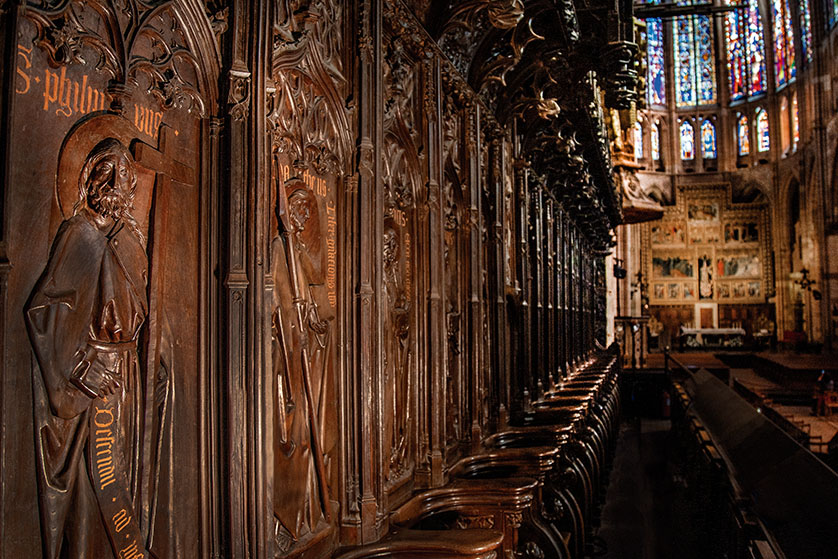 20 Jan The choir of León’s Cathedral

Liturgical story of the walnut jewel from León

The choir of a religious temple is the place where the priests daily pray the liturgical or canonical hours. In León’s Cathedral, this space was built for the priests of the Cathedral’s Chapter and, exceptionally, for the placement of other civil or religious authorities with them. However, it is only used now for extraordinary acts in order to preserve its status since the choir of León’s Cathedral is one of the most important Medieval choirs in Spain due to its age and the beauty of its sizes. Next, we are going to find out the liturgical story of its religious statues in this first installment while discovering the moving universe of its pagan figures in the next issue.

Designed in 1461 by master Enrique, the choir began to be built after the Cathedral’s Chapter ordered to collect the necessary walnut wood from different Leonese forests for five consecutive years. The construction of the choir also needed another fourteen years for the final carving and assembly of pieces made by masters such as Juan de Malinas, Fadrique, Theodorico and Diego Copín.

At the beginning, it was located near the main altar —as in other cathedrals—, but in the middle of the 18th Century it was moved to the place it occupies today with the aim to bring the worship closer to the parishioners. Together with the Renaissance alabaster retrochoir of the end of the 16th Century, they form a spectacular whole which covers two sections of the main nave next to the crossing. The choir was completed in 2013 with the new and magnificent Cathedral’s organ that was placed on its lateral sides.

Its rectangular bench collects up to 76 chairs distributed in two heights; those of the first level —with carvings of Old Testament’s characters) are destined to the beneficiaries, portion controllers, graduates and other servants of the temple; those of the second level —with representations of apostles and saints— are reserved for the canons.

As in other choirs, all pews have swivel seats that free up the necessary space for the access and also allow their occupants to stand but resting on a discreet corbel called “patience” or “mercy” that is located under the arms.

As Mr. Máximo Gómez, director of the Diocesan Cathedral Museum of the Pulchra explains, “it is easy to understand the monumentality of León’s Cathedral choir since they were already 76 canons in the year 1475 having each one his corresponding seat to go to the temple as many times as required by the different canonical hours: prime, lauds, terce, sext, none, vespers and compline”.

Regarding to its catechetical function, the also responsible for the diocese’s Heritage recalls that “as almost always, the message of salvation given by Christian Art was addressed to the ears, but also to the eyes and the rest of the senses at the same time. It is not surprising that in tune with the prayers, songs, sermons.. etc. the plastic representation of the mystery or the image of the saint in whose honor the liturgical act was celebrated were also present. Hence the impressive parade of characters so beautifully carved in this set of chairs, both from the Old and New Testaments and from the life of the Church”.

Gómez Rascón highlights the fact that the Pulchra’s choir was the first one in Castile and León where the Flemish style of the second half of the 15th Century was masterfully enmeshed in the Late gothic structures, already free from the Mudejar influence.

In León’s Cathedral, the pews on the side of the epistle —on the right, looking at the altar— is known as the Bishop’s Choir while the ones on the side of the gospel —on the left— as the King’s Choir, since both authorities have a reserved seat on each side. Regarding to the iconographic program of its carvings, the choir shows two master lines perfectly defined: That of religious subjects and that of profane subjects. Even the structure itself is designed in order to delimit the spaces of each figure or scene, without mixing, without confusion.

In summary, Mr. Máximo Gómez recalls that “ the religious issues occupy the important parts, that is, the boards that support each seat: rectangular those ones of the upper series, square ones of the lower part, and other more spectacular like the carvings of the headboards. They respond to an organic, biblical program or in accordance with the Christian saints—practically the same one that is captured in the high stained glass windows— established by the Cathedral’s Chapter so that nothing could induce confusion or error.

“Actually, the basic iconographic common thread was marked by the Holy Bible and the Credo. The selection of Christian saints allowed a greater margin of freedom, because in addition to the universal calendar, each particular church or community had its own saints who joined the pews after the 15th Century, ”he adds.

Due to the quantity and detail of the carvings, we show some of the religious carvings in this first installment while leaving the analysis and location of the set of pagan figures related to Creation, fantasy, history, social life and moral behavior of the time for a second installment.