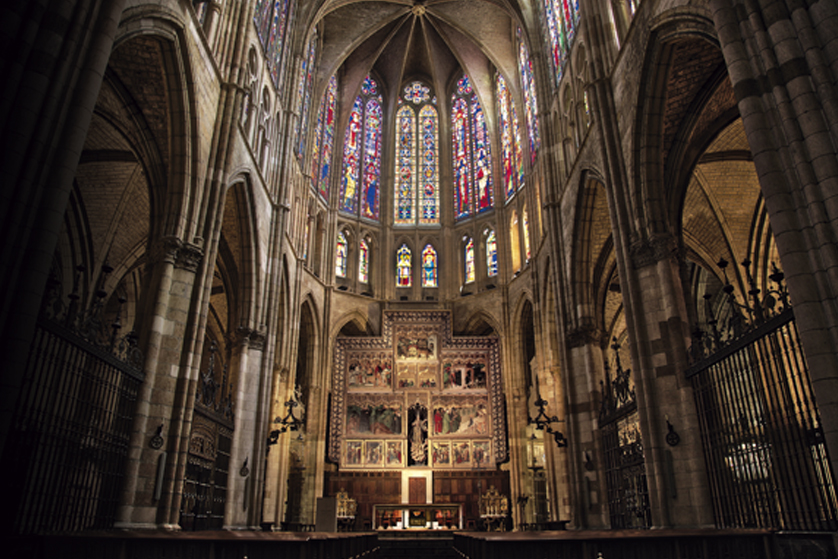 The sacred stone of the Pulchra

Everything in León’s Cathedral is sacred. Each of its stones were carved to raise a Catholic temple consecrated twice (1303 and 1901). Although the inclemencies, the restorations and the liturgical or cultural evolution have leave a mark on some of those stones, have changed them or have made them disappear, the High Altar —with different forms and dispositions— has always keep the same meaning. Now, we offer some historical-artistic notes about the altar and the presbytery while inviting you to discover the symbolism of the Sacred Stone par excellence of the Pulchra, with the help of the worship’s director of León’s Cathedral, Mr. José Sánchez González.

There are no references about the primitive Main Chapel and the first Altar of the Pulchra until the 15th century, when the Cathedral’s Chapter entrusted to the master Nicolás Francés a large Gothic altarpiece that occupied the five central intercolumns of the presbytery. From that original Gothic altarpiece (with 18 large polychrome panel paintings and 50 small paintings), only remain the 5 paintings of the current altarpiece and another 18 which were installed on the Bishop’s throne, designed by the architect Juan Crisóstomo Torbado in 1906 which was located in one of the sides of the Presbytery —the so-called «side of the Gospel”— until 1990.

In 1740, the Baroque influences and the fame that Narciso Tomé achieved with the so-called Transparente (Baroque altarpiece) of Toledo’s Cathedral forced the Cathedral Chapter of León to hired him to replace the Gothic panel paintings —which were dismantled ending up scattered through different religious temples of León) for a new altarpiece with polychromatic wood carvings which, most likely, would include a new altar related to the style.

Years later, the architects of the «Great Restoration of the 19th Century» thought that this Baroque altarpiece clashed with the simplicity and purity of León’s temple and decided to move it to the church of the convent of St. Francisco El Real in León, Capuchin Fathers of León —Now attended by the Capuchin monks—. It can still be seen scattered around the temple (Behind the altar, on the sides of the presbytery and in the high choir). Any reference from the Baroque altar of Tomé has been lost.

With the aim that the León’s Cathedral had an altar suitable for worship, the architect Juan Bautista Lazaro designs a new altar in the middle of the altarpiece with a double marble board in 1901, supported by four columns and surrounded by golden decoration. On that altar it was placed the silver tabernacle of Manuel Rebollo (1826) and the two parts of the reliquary urn of Enrique de Arfe (1519) that the master Suero de Argüello separated in 1570 and which were rejoined in 1826, when the remains of the patron saint of León were transferred to the urn of Candanedo y Neirá, which currently is under the Altar.

Around 1966 —after the Second Vatican Council— the plain altar of stone on columns that imitate the Gothic art was placed in the middle of the Main Chapel, separated from the altarpiece so that the versus populum religious celebrations could be developed. (The priest and the community stand facing each other, expressing this way a single Eucharistic assembly).

In spite of this evolution, the meaning of the High Altar of León’s Cathedral has always answered to the same theological and catechetical meanings. Unalterable senses, unknown by many, which go beyond the architectural or liturgical tastes. This way is explained by the canon worship’s director of the Cathedral, Mr. José Sánchez González.