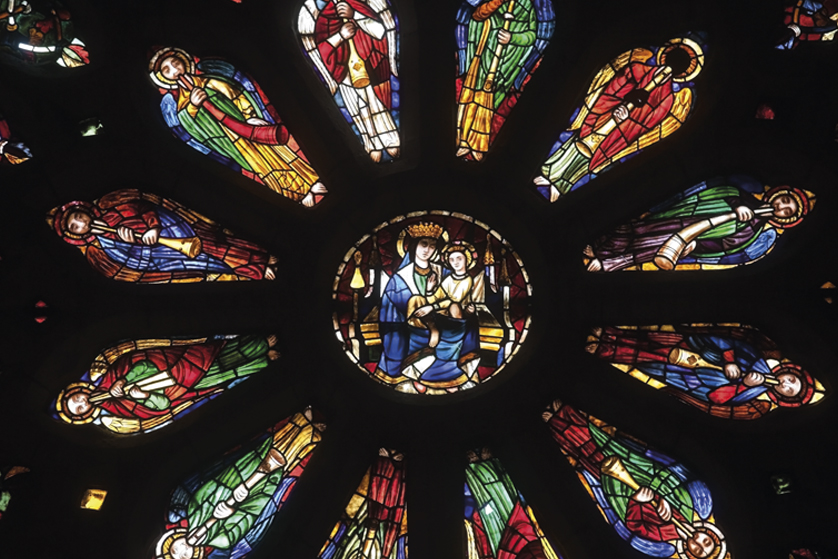 After months of intense work, it begins the countdown to the restoration’s result of the Cathedral’s main façade and its large rose window, formed by hundreds of polychromed glasses showing Virgin Mary in the center. The one that some call as the “heart of León» has been able to be recovered thanks to the help of CEPA Foundation, an entity that has defraud the 400,000€ project. Next, we present the history of this spectacular stained glass window and the development of its restoration works.

The rose window of the Pulchra’s main façade, on which the sunset of León reflects every day, culminates the iconographic significance of the Cathedral’s stained glass windows whole. These were designed so that the morning light illuminates the stained glass windows of the apse and travels through the nave until finding the Virgin Mary, the protagonist of every cathedral and of this huge polychromed glass «heart».

According to the person in charge of the Heritage department and director of the Cathedral-Diocesan Museum, Mr. Máximo Gómez Rascón, «the stained glass windows of León’s Cathedral show with clarity the consciousness of another era, that of the construction of this temple for centuries. The celestial and the earth, the universal and the particular. The abode of God among men”.

The stained glass windows of the 13th & 14th Century rose window show the Virgin in the center —with the Child on a throne— surrounded by twelve trumpet player angels, in a first perimeter, and by other twelve small panels, in a second outline. They are followed by two other of 24 large vertical panels and another 24 panels more as the finish of the entire stained glass whole.

Despite enduring the inclement weather and even the shocks that occurred in León due to the famous Lisbon earthquake of 1755, this rose window had to be dismantled in the so-called «Great Restoration» of the 19th Century together with the stained glass window of the Tree of Jesse on the apse, which was restored by the Catalan master Rigalt.

The journalist Manuel Cachafeiro described in the 4th issue of this magazine the rose window of  the first temple of León’s diocese as «a symbol for León and for any Leonese citizen; it crowns the city from the highest point and at the top of the first religious building declared as a National Monument in Spain. Its skeleton of stone and glass pumps in and out. It is the work of Man and the clarity of the believer. The light of the Savior”.

In this new installment, Mr. Diego Asensio, technician of the Diocesan Heritage Delegation, brings us even closer to the new Pulchra’s heart that is being restored thanks to CEPA Foundation which belongs to the Leonese brothers Cesáreo and Pablo González, also owners of the well-known Mexican Modelo brewery.