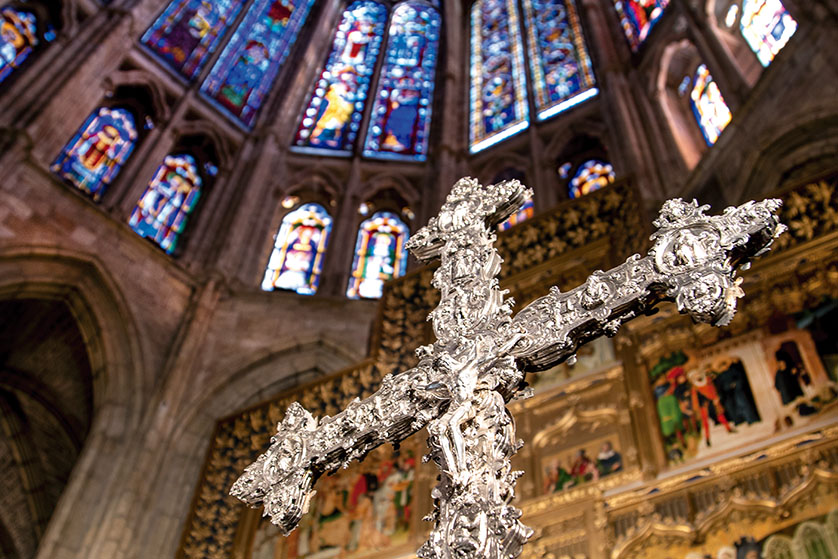 20 Jan The processional cross of the Pulchra

Example of the 17th-Century goldsmithing from León

Purchased from the parish of Quintanilla del Molar (León) by the Cathedral’s Chapter in 1880 for its restoration and conservation, it has been unmoving, majestic, in the High Altar of León’s Cathedral for over a hundred years. With the help of the local historian, Iván González Sánchez, we invite you to know the historical-theological significance of the universal symbol of Christians and the extraordinary formal and iconographic richness of one of the best examples of goldsmithing from León at the end of the 16th Century by an unknown author. It may go unnoticed in the Cathedral due to its location, but actually is a fundamental element of the León’s main temple.

According to Cruz Valdovinos (Madrid, 1982) there are several reasons to consider the 16th Century as a brilliant period in the field of goldsmithing —even more than in the time of the Catholic Monarchs— in the Kingdoms of Castile and León: The reception of silver from the Americas; the increase in commissions and; the social consideration of the work’s author —from an artisan to an artist—. In this sense, the fundamental historiographic source for the study of the 16th-Century silversmithing in León is the publication Arte del Renacimiento en León. Orfebrería (León, 1997) of professor Hérraez Ortega. Here, the author establishes an approximate chronology of this processional cross of unknown author: the last third of the century. He also maintains that the top responds to an original model, since we are before a work halfway between two typologies: On the one hand, it reminds us to the scheme of straight arms and circular terminations initiated by Enrique de Arfe on the cross that is kept in St. Isidoro’s Museum; on the other hand, the union of the arms to the square is carried out by means of semicircular outlines relating to the balustrade crosses.

The minutes of October 8, 1880, reflect the agreement of the Cathedral’s Chapter to buy the parish cross of Quintanilla del Molar, a town belonging to León’s diocese. Mr. José Tomás de Mazarrosa, Cathedral’s administrator, recorded in the accounts book of that year the acquisition of the cross for 4,818 reales —old Spanish coin— which were paid to the parish priest Mr. Ysidro Rodríguez. The same document warns that the silver cross was destroyed. On the other hand, the treasure’s inventory of 1900 reflected that the piece did not have a shaft, so a new one was added for its first use on the Corpus’ day in 1901. At present, this cross no longer heads the processions since only is removed from the presbytery on Holy Thursday when the altar is undressed until the Easter Vigil.

Just as at the formal level it stands out for its originality, its iconographic program responds to models that were already common in the processional crosses of the Plateresque style and that gradually fell into disuse throughout the second half of the century.

Unfortunately, it is still common to consider goldsmithing as a minor art. However, we have been able to verify that both the formal and iconographic richness of this cross is very large. We are before an exceptional work of art from the end of the 16th Century which may go unnoticed due to its location but which actually is a fundamental element of León’s Cathedral.