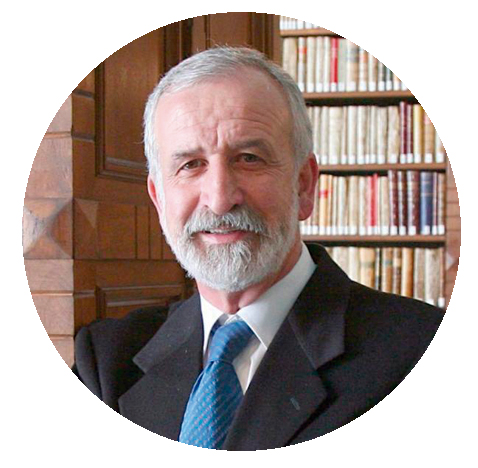 When a grammarian like me approaches to the Pulchra Leonina is impossible not to stop before a stained glass window referring to his discipline: the so-called De la Cacería (The Hunt) (Norte XII). Undoubtedly, the most difficult due to several factors:

• Absence of numerous puzzle’s pieces. It is likely that the composition of this window is the result of taking advantage of the remains of two or three stained glass windows with the same format, but dedicated to different themes.

• Outplacement of some of its representations.

We can observe several groups in the royal entourage group:

The lectio facilior would reunite all these figures in a single group, open to varied interpretations: a hunting, a royal journey of Charlemagne to Constantinople (as in Chartes)…

In the other part, they appear explicit references to three liberal arts: GRAMMAR (a11), DIALECTIC (a9) and ARITHMETIC (b4). Although without a wall label, there are several iconographies dedicated to MUSIC: angels playing a carillon (a9-10), a mandora or Moorish guitar (a5-6) and an organ (a1-2). In (b5-6) they are represented a vihuelist and a dancer with chopsticks. The reading of this part presents numerous problems:

• The reference to the disciplines of the trivium and the quadrivium does not belong to the thematic canon of the Gothic stained glass windows started by abbot Suger in the basilica of St. Denis (but they appear in other formats). However, there is a significant antecedent: the north rosette of Laon’s Cathedral. The inclusion of the liberal arts in a León’s Cathedral window can not be separated from the close relationship with Alfonso the Wise, a great defender of their academic establishment.

• They are not all. A strange fact because they form a representative system. RETHORIC, GEOMETRY and ASTRONOMY must have been lost.

• There is no correspondence between the wall labels and the underlying figuration. Under the name of GRAMMAR appears an angel playing the carrillon (who represents MUSIC in Laon). The DIALECTIC (a3) does not correspond with an angel playing the organ. In the ARITHMETIC (b3) lower panel appears a scene from the DIALECTIC: two monks debate around a great book. The (d1) scene —without heading— corresponds to the GRAMMAR (b11-12) : a teacher teaches writing to a student dressed in green.

• The trivium’s disciplines are placed under an architecture of three towers. The two GRAMMAR’S (a11-12) quadrants fit perfectly, but not those of the DIALECTIC (a3-4). This leads us to suppose that the upper part would correspond to RETHORIC —absent—.

• The arithmetic —discipline of the quadrivium— appears under a flanked by two oculi subdivided into four parts (a4). Another similar pointed arch —without a wall label— appears misplaced on the dromedary (b2).

A series of enigmas in its reading asking for investigation.

Professor and member of the Royal Academy of the Spanish Language