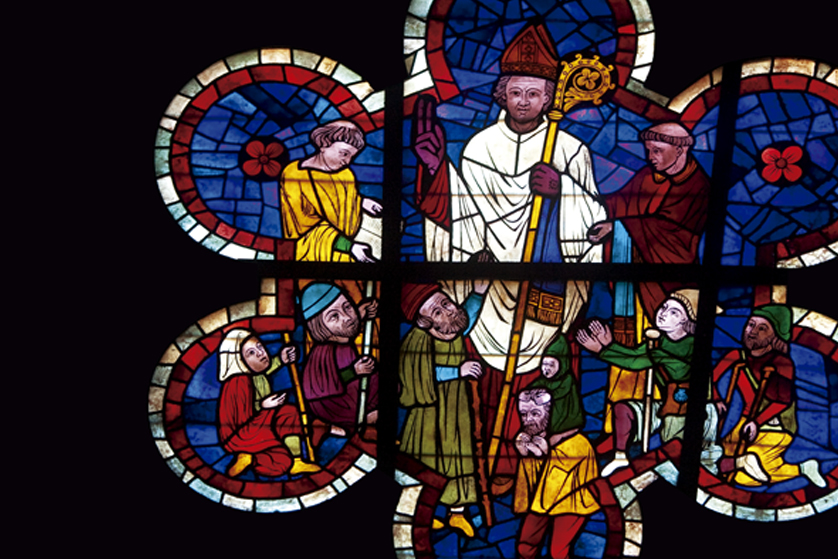 25 Ene Hospitals… of Peace and Mercy

The start of the hospital aid in León dates back to two humble 11th Century cathedral refuges. One of them began to help both sick pilgrims who arrived to León and anyone else in need: poor, elderly, outcast… Up to twenty other hospitals were added to this first one. They were managed by the canons of the Cathedral’s Chapter and by specialized clergymen (the portion controllers). The first doctors were only incorporated from the 15th Century. All these primitive hospitals of Peace and Mercy turned into St. Antonio Abad Hospital, the Leonese health center of reference for centuries which continued under the management of León’s Cathedral Chapter until 1966 when it became of public ownership.

The first hostel that was built next to the old Romanesque León’s Cathedral was promoted by bishop Pelayo in 1084, thanks to the legacy of the Cathedral’s Chapter, as recorded by the Tumbo Legionense (Codex nº11). In 1096, bishop Pedro did the same with a second lodge that was located in the land of the old St. Marciel monastery and its church. Over the years, it gave rise to St. Marcelo Hospital.

In 1123, bishop Vermudo also started up —with the help of Mr. Gómez, a Leonese noble and protector of queen Urraca— the so-called St. Sepulcro Hospital. It was so named due to its location in the old church of St. Ana belonging to the Order of the Holy Sepulcher. This hospital also belonged to the Cathedral’s Chapter changing later its name to Mr. Gómez Hospital.

In 1159, archdeacon Mr. Arias contributed in his testament to the Lepers Hospital. Therefore, a few years later — in 1175— king Fernando II exempted him from any royal tribute.

Along the 13th & 14th Centuries they were also added to these first hospitals others like those of St. Froilán, St. Benito or St. Lázaro House (Malatería). But all of them ended up gathering their services in St. Marcelo Hospital, attached to the old León’s temple of the same name and turned into an abbey for that purpose by a papal bull of Innocent IV in 1254. St. Marcelo was the germ of the great Medieval hospital of León, St. Antonio Abad Hospital.

The importance of St. Marcelo Hospital in the 13th Century was clearly reflected in 1254, when Innocent IV granted to the Bishop and to León’s Cathedral’s Chapter the power to appoint a rector for the hospital by papal bull. This position was ocupied by the abbot of St. Marcelo in perpetuity. Later, it was occupied by a cathedral canon together with the eleven clergymen who were in charge to take care of the pilgrims, the poor men and the sick.

In the 16th Century (1531), the center was renamed as St. Antonio Abad Hospital, after receiving numerous goods and services from the Order of St. Antonio, whose friars extended their «medical services» throughout Europe (first under the mandate of the Benedictines and later under papal mandate).

This way, St. Antonio Abad became into the great hospital of León. Its fame spread to other Spanish provinieses. Even the emperor Carlos I ordered in 1535 to the mayor of León that the Cathedral’s Chapter should gather in this center all the assistance of other hostels and dispensaries scattered throughout the city. This task was carried out gradually until the S. 19th Century.

With the Enlightenment —at the end of the 18th Century— the State began to confiscate goods and properties of the Church. In 1805, Carlos IV ordered that the Public Administration should control St. Antonio Abad Hospital according to a Disentailment Decree. This meant «the alienation of all properties belonging to Brotherhoods, Memories, Pious Works, Hospitals, Hospices, Houses of mercy, confinement and foundlings. Moreover, the sales and the amount of these resources must go to the amortization fund with a 3% annual interest».

In spite of the administrative control, the Cathedral’s Chapter reached to sign a contract with the Provincial Council of León in 1863 in order to maintain the ownership and management of the Hospital in exchange of a public subsidy which changed according to the number of people helped. This way explains Fernández Arienza and is also included in the monograph published in 1880 by the hospital’s main doctor, Mr. Lesmes Sánchez de Castro («La Hospitalidad «). Here, the doctor describes the center as a building «[…] which can be divided into two extensive pavilions —the right for women and the left for men—, which lacks of its own architecture and which clearly reveals the changes that it had underwent and which have made to lose its primitive character […]«.

The author recalls that, at the end of the 19th Century, the Hospital had a capacity of 166 beds and treated more than a 1,000 patients a year coming from León, Oviedo, Lugo, La Coruña, Orense, Burgos… and other Spanish provinces.

Despite the constant improvements and remodeling, the old facilities had been embedded in the urban structure of the city. This way, the Civil Government, on July 29, 1903, proposed to close it and to raise a new one outside León. The City Council and the Cathedral’s Chapter Council oppose the transfer due to the complexity of the operation. But ten years later, on February 22, 1913, the Cathedral’s Chapter established the New Hospital Commission (composed by the canons Manuel Sanmartín Aparicio, Celedonio Pereda Díez and Ricardo Canseco Salgado) «in order to arrange or develop as many acts and contracts as necessary until the construction of a new hospital…» (ACL No. 10.069).

After receiving an offer from the businessman Luis González Roldán, the Cathedral’s Chapter sold the old Hospital on April 5, 1919, allocating the 500,000 pesetas of the time to the construction of the new St. Antonio Abad Hospital in the outskirts of the city, in an area called as Altos de Nava. It was inaugurated two and a half years later, on June 27, 1922.

However, on September 26, 1966, the hospital fell into public hands when the Cathedral’s Chapter sold it definitively to the Provincial Council, which currently is the owner of the building. It has also become part of León University Hospital whose management depends on the autonomous government of Castilla y León.

With the money of the second sale of the new hospital, the Cathedral’s Chapter and the Bishopric started up in 1968 the Hospitable Work of Ntra. Señora de Regla —north of the cathedral cloister— destined to serve the priests and other people who were referred by the parishes or by Caritas Diocesana. This center was delivered in terms of management to HM Hospitales company in 2016.

From the old hospital there are only preserved a 17th Century sculpture of St. Antonio Abad made by Luis Fernández de la Vega —which currently is exhibited in the Sacred Art Room of the Provincial Ethnographic Museum, Mansilla de las Mulas), the drawer room, the albarelli and other ceramic jars of the old apothecary which now can be seen in the Diocesan Cathedral Museum.