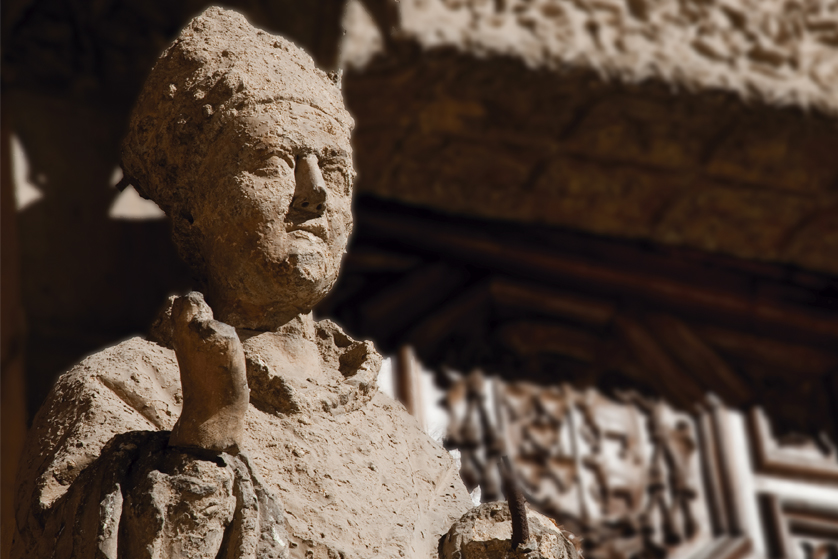 The south façade of the Pulchra

The Virgen Blanca presides over the main façade and the Virgen del Dado the north façade, while the patron saint of León’s diocese, St. Froilán, is the main figure of the south Cathedral’s façade, which rises up to 48 meters high in front of the episcopal palace. Although it has been restored several times, it keeps the three original Gothic façades that were conceived as a tribute to the hermit who captivated in the 9th Century the people of León and king Alfonso III himself until becoming, first, Bishop of León, and, then, the patron saint of the diocese.

This is the façade which supports the greatest architectural pressure of all naves and which, for that reason, has had to be rebuilt on more occasions. Master Jusquín had to already raise in the 15th Century (1440-1470) the two lateral towers as buttresses for the flying buttresses. These towers are popularly called La Silla de la Reina —on the left— and La Limona —on the right—.

The gable was rebuilt in the 17th Century with a Baroque style (in the shape of a bell gable) which was replaced by a simple window after the Lisbon earthquake (1755) and which, fortunately, gave way to the current Neo-Gothic rosette window designed by Matías Laviña in the great restoration of the 19th Century. The first stony statue of St. Froilán made by Agustín Mustieles in the last 19th Century restoration (1859-1901) presides over the vertex of the gable.

We are able to contemplate from the beginning of Ancha Street the spaces of its spectacular stained glass windows —particularly the southern ones—, the pinnacles and the gargoyles which decorate its upper part. As we approach, we discover the details of this great portico, divided into three doors, with the sculpture of St. Froilán in the central mullion. The saint has been also represented standing, with the mitre and the bishop’s staff, or sitting and exercising preaching. However, he often appears with a wolf attached to his feet which accompanied him always carrying his saddlebags as punishment for having devoured his donkey, according to the legend.

The left part of the façade is known as Puerta de la Muerte (Door of Death) because of the small winged skeleton sculpted in one of its doors.

The central door, the Door of St. Froilán, was also called during centuries as the Door of the Bishop since it was the one used by the diocese’s pastor to enter into the Cathedral when the cathedral temple and the episcopal palace were united by the disappeared Casa Obispo. Others prefer to call it as Puerta del Sarmental because of the similarity between the sculptures of the tympanum and those of the door of the same name of Burgos’ Cathedral. The sculptures of León’s Cathedral also show the figures of prophet Samuel, the Virgin with the Child and the Three Magi —on the doorjamb—, and a relief of seated Christ with The Book of the Law, surrounded by the tetramorphic icons of the evangelists writing on tables (the bull —St. Luke—, the eagle —St. John—, the lion —St. Mark— and the man —St. Matthew—).

The door on the right is the so-called Puerta del Traslado due to the scenes in relief of the death and the temporary transfer of the Saint’s remains to the monastery of Valdecésar, in order to protect them from the Arab invasion.

The figure of St. Froilán in León’s Cathedral can go unnoticed among the ocean of stone reliefs, canvases, sculptures, chapels… or the spectacular sky of its stained glass windows. But «the prominence of St. Froilán is unquestionable in the Pulchra Leonina «, as explained by Máximo Cayón, chronicler of León.

In addition to the stone references of the south façade, the Chest of St. Froilán can be seen inside the temple —under the altar’s table—. It was a work of the silversmiths Jerónimo de Neira and Juan de Candanedo in 1635 which contains the remains of the patron saint of León since the 17th Century. The altarpiece of the aforementioned altar —work of Nicolás Francés— hosts three large panels which allude to the saint; «In one, St. Froilán submits to the test of the embers, the proof which favorably corroborated to him the God’s call to the ministry of preaching; In another, the visit of Alfonso III the Great to the aforementioned Cistercian monastery of Moreruela in order to propose the appointment of the saint to the episcopate at the request of the people of León; In a third, his consecration as Bishop of León, on the day of Pentecost of the year 900«, as pointed out by Máximo Cayón.

The reliquary of the Cathedral’s sacristy —not in public view— keeps «the femur of St. Froilán» which is shown every October 5 to the faithful who follow the Eucharistic celebration of the great day of León inside one of the cabinets with a polychromatic carving of the saint on the front. The Cathedral’s museum also preserves the first ark commissioned by the Cathedral’s Chapter to the great goldsmith Enrique de Arfe in 1501 in order to transfer the remains of St. Froilán from the inner sepulcher of the south façade to the high altar, as well as a small sculpture of the saint in the so-called Treasure Room.

We also find a sculpture of St. Froilán in the high chairs of the choir, in addition to the sculpture of the patron saint of León —work of Esteban Jordán— which presides over the whole set embedded in the vertex of the retrochoir (looking at the main altar).

Even at the Cathedral’s top —between the 13 bells of the bell tower— appears La Froilana, the largest bell of the diocese which was cast in 1794 by order of bishop Cuadrillero and consecrated in 1930 by the then Leonese prelate , Mgr. Álvarez Miranda.