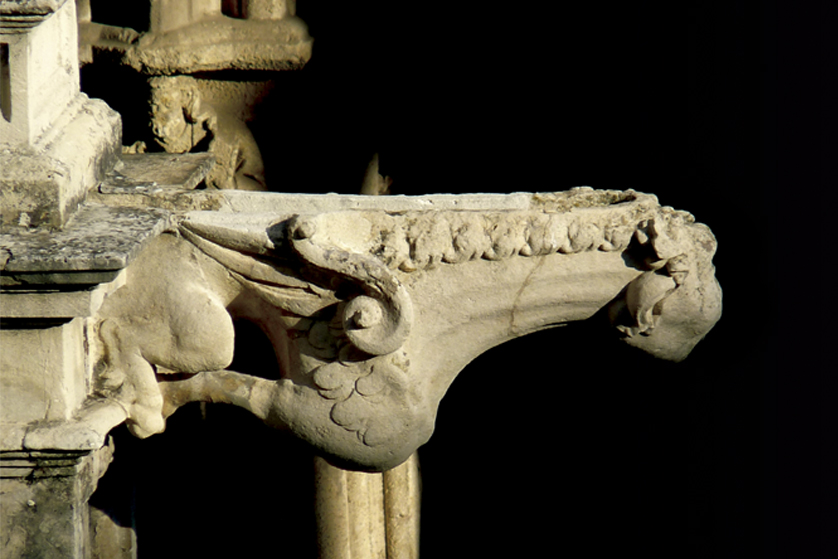 03 Jul The gargoyles of León’s Cathedral

Although they are not as visible as the stained glass windows, the sculptures or the façade’s reliefs, one of the attractions of León’s Cathedral are its amazing gargoyles, stone representations of real animals, hybrids, demons, anthropomorphous or simply geometric designs which stand out of the cloister’s walls, façades and other exterior temple’s areas. Of enigmatic symbolism and great decorative value, the function of the gargoyles is none other than to expel the water from rain that falls on roofs and corridors. For this reason, they are often confused with other stone figures —the so-called chimeras or grotesques— such as the famous by Viollet-le-Duc in Notre Dame. With the help of the doctor in History of Art, Dolores Herrero, and the photographer, Jordi Custodio, we invite you to know these enigmatic stone creatures which seem to watch the Pulchra from above.

The great majority of the gargoyles of León’s Cathedral are neo-Gothic style, fruit of the so-called Great Restoration of the 19th Century. But there are also previous gargoyles, such as those of the cloister in which we see the Renaissance and Baroque influence (Fig. 1).

The neo-Gothic architects —among which Viollet-le-Duc stands out— filled many cathedrals in Europe with wonderful and imaginative gargoyles. A fact that has its detractors and its defenders. Undoubtedly, we can not compare a Medieval gargoyle with a neo-Gothic one, if only for the value of its antiquity. However, in defense of the neo-Gothic style which recovered the Gothic one, the neo-Gothic gargoyles of the Pulchra have a remarkable interest and artistic beauty.

Referring to the conservation and maintenance of the gargoyles and their water drainage, it stands out the good state of the gutters, both those that cross the roofs as those of the gargoyles. Everything is perfectly protected with coatings or protective plates which allow drainage through the various Cathedral’s areas. There are also grids —rectangular and circular— placed in the holes of the ground in order to prevent that the falling wastes or transported by the birds obstruct the running of the gutters.

The iconography of the Pulchra’s gargoyles is varied and fascinating. We find real animals, hybrids, demons, anthropomorphous and geometric designs.